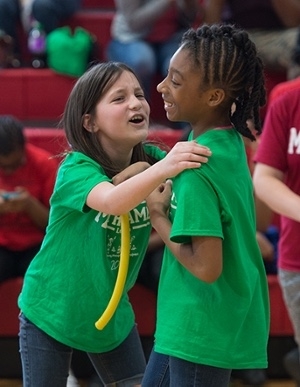 The Alton Alge-bruhs had to go to sudden death overtime to defeat the Alton Taco Cats 25-24 for the title. The seven-team field included two Chicago entries along with teams from Boston, Idaho and Virginia. The Virginia State University Divide & Conquer team placed third.

“The tournament allows kids to enjoy, engage, be energetic and learn something important in the process,” said Greg Budzban, PhD, CAS dean.

Vahle noted that the students’ experiences with math varied. “Some of them love math, some of them did not like math very much before they started here,” she said. “We did pre-tests and post-tests and saw tremendous growth in their math abilities over the course of our programming. It gives the kids a good thing to do after school. They have fun with their peers, they do games, we practice our math, and it’s all in an environment where they’re learning from high schoolers older than they are. It’s not like they’re going to another class after school.

“These kids come from diverse backgrounds, so it’s rewarding to win. They’ve got a big spot in their trophy case, and we hope that it can be recognized as much as an achievement as any of the sports in their school.”

The Alton Mathletes won the 2017 event in Washington, D.C. The event will return to the nation’s capitol in 2019 on May 4 as part of the National Math Festival, and Vahle said Alton would most definitely be there.

This success story began through a grant from the Mathematical Association of America’s (MAA) Tensor-SUMMA Program and contributions from the John Simmons Family Foundation. With that support, Budzban spearheaded the Alton Math Games League in 2017 in cooperation with the Alton School District. Funding continued in 2018 through another grant from the MAA Tensor-SUMMA Program, and additional funding from the Mannie Jackson Center for the Humanities spearheaded by executive director, Dr. Ed Hightower.

“It was very rewarding and gratifying to see young people enjoying solving math equations and having fun at the same time. The teamwork and sharing was incredible. The Mannie Jackson Center looks forward to continuing its partnership with the Young People’s Project (YPP) and SIUE. It is our goal to involve more local school districts in this exciting initiative” said Ed Hightower.

The national league has emerged from a collaboration of local school districts and universities with two national nonprofit organizations: The Algebra Project and The Young People’s Project. YPP uses math literacy work to develop the abilities of elementary through high school students to succeed in school and in life, and in doing so involves them in efforts to eliminate institutional obstacles to their success.

Maisha Moses, YPP executive director, loves the tournament because she sees how much fun kids have in playing the game. “It’s fast-moving in a team environment based on math. Kids get to learn through movement, and there are few opportunities to do that. Parents get behind it, so at the grass roots level, people come together around math.”

Central to SIUE’s exceptional and comprehensive education, the College of Arts and Sciences has 19 departments and 85 areas of study. More than 300 full-time faculty/instructors deliver classes to more than 8,000 undergraduate and graduate students. Faculty help students explore diverse ideas and experiences, while learning to think and live as fulfilled, productive members of the global community. Study abroad, service-learning, internships, and other experiential learning opportunities better prepare SIUE students not only to succeed in our region’s workplaces, but also to become valuable leaders who make important contributions to our communities.