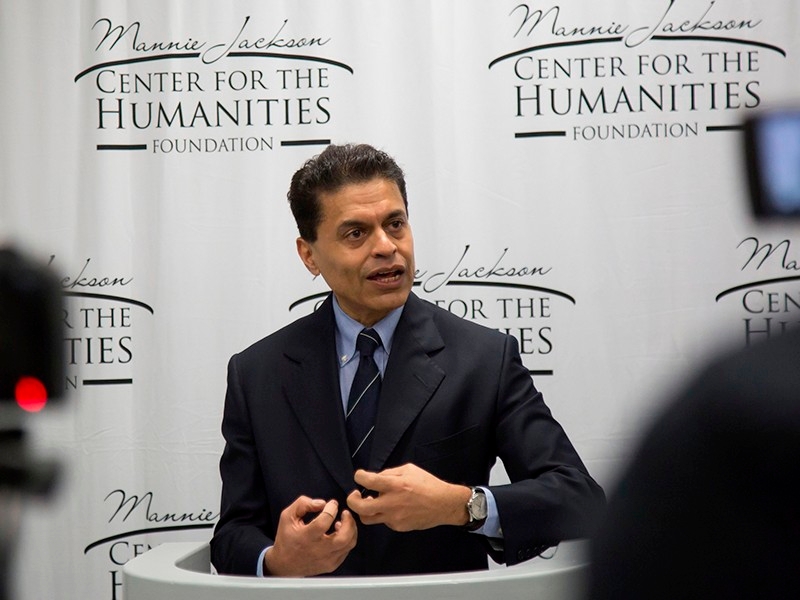 GODFREY – International television news host Fareed Zakaria spoke on the importance of humanities-inspired leadership during the Mannie Jackson Center for the Humanities Speaker Series Fundraiser, Tuesday, March 26, at Lewis and Clark Community College.
Zakaria’s message focused largely on the importance of humanities and soft skills in education and professional training.
“One of the great challenges is to figure out what helps you succeed in life,” Zakaria said. “My strong conviction is that a great deal of it has to do with your ability to lead; with your ability to work with people. Education is a solo enterprise – you take a test by yourself; you write a paper by yourself – but life is teamwork. And so how you can manage to engage in that teamwork, lead people, work with people, inspire people – all those skills become very important. Education tends to be sometimes very focused on technical skills; life is often about the ability to use those skills in ways that interact with other human beings.”
L&C President and MJCHF Board Director Dale Chapman said humanities-inspired leadership is about enabling a new generation of global leaders equipped with the culture, mindset, character traits, ethics, practical experience, mentoring, and skill sets to better anticipate and solve complex and interdependent problems before they emerge as crises.
“It’s difficult to imagine a more qualified speaker who exemplifies Humanities-Inspired Leadership than this year’s keynote speaker – Fareed Zakaria,” he said.
Zakaria hosts Fareed Zakaria GPS (Global Public Square) for CNN Worldwide and is a columnist for The Washington Post, a contributing editor for The Atlantic, and a bestselling author.
To learn more about the Mannie Jackson Center for the Humanities, visit www.mjchf.org or call (618) 655-2881.
For more hi-res, downloadable photos from the event (no login required), visit http://bit.ly/MJCHF_Zakaria.

Zakaria hosts Fareed Zakaria GPS (Global Public Square) for CNN Worldwide and is a columnist for The Washington Post, a contributing editor for The Atlantic, and a bestselling author.

Fareed Zakaria GPS is a weekly international and domestic affairs program that airs on CNN/U.S. and around the world on CNN International. Since its debut in 2008, it has become a prominent television forum for global newsmakers and thought leaders.

Check out his full bio at fareedzakaria.com.